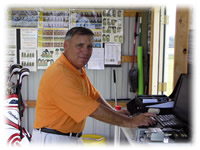 My goal as a teacher is to help my students achieve a good, consistent shot. The student must be committed to improve their game and take the necessary steps to get there. It is not an easy process, but with time and commitment anyone can learn. To me being a good coach means, “…taking it to the course with confidence.” And you can too!
~ Ted Sheftic

Honors & Awards Ted played on the South American, Mexican and PGA Tour. He has won over 50 tournaments in his career. In 1987, 1994 and 2000 Ted was recognized as Teacher of the Year for the Philadelphia Section PGA. He won the Horton Smith Award during the 1999 season and was selected Professional of the Year for the Central Counties Section of the PGA in 1987. Ted was just recently ranked number one teacher in the state of Pennsylvania by Golf Digest in the August issue. He has golfers from all over the country coming to him for lessons including a number of lady professionals from the LPGA Tour and several top men and women amateur golfers. Ted has a natural easy way of communicating and many excellent drills to help golfers of all levels.

My most outstanding student was Jenny Chuasiriporn. Coaching Jenny since age 1 has been very rewarding for me.

Dear Golfer,
The decision to take a lesson is based on credibility and expected accomplishment. These factors are dependent upon the quality of instruction and the qualification of the instructor Through 40 years of experience, Ted's swing concepts allows you to develop a sound fundamental swing. Ted's teaching philosophy along with his mental training will give you the confidence to go to the next level. Let me help you develop a program that's right for you.

Please contact Ted directly at 717 891-0684 or This email address is being protected from spambots. You need JavaScript enabled to view it.
Click Here to Visit the Ted Sheftic Learning Center's Website!

Ready to Reserve your Spot?